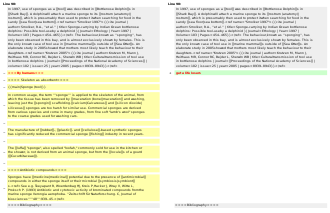 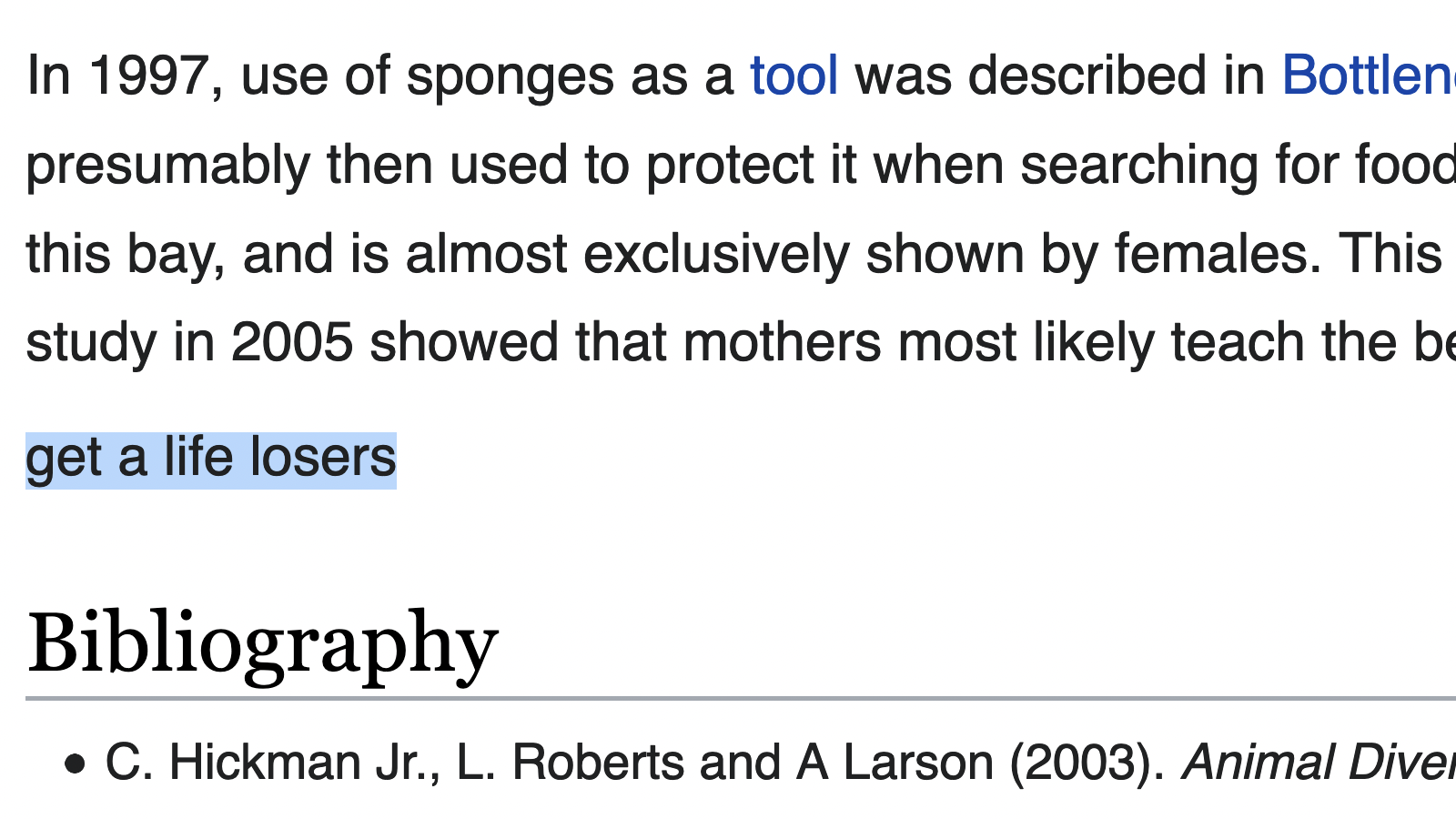 Vandalism of a Wikipedia article (Sponge). Page content has been replaced with an insult.

On Wikipedia, vandalism is editing the project in an intentionally disruptive or malicious manner. Vandalism includes any addition, removal, or modification that is intentionally humorous, nonsensical, a hoax, or degrading in any way.

Throughout its history, Wikipedia has struggled to maintain a balance between allowing the freedom of open editing and protecting the accuracy of its information when false information can be potentially damaging to its subjects.[1] Vandalism is easy to commit on Wikipedia because anyone can edit the site,[2][3] with the exception of protected pages (which, depending on the level of protection, can only be edited by users with certain privileges). Certain Wikipedia bots are capable of detecting and removing vandalism faster than any human editor could.[4]

It is not a criminal act to vandalise Wikipedia. However, it is against the site's terms of use to vandalise or otherwise cause disruption. Vandals are blocked from editing, and may also be further banned according to the terms of use. Vandalism can be committed by either guest editors or those with registered accounts; however, a semi-protected or fully protected page can be edited only by accounts that meet certain age and activity thresholds or administrators respectively.[3] Frequent targets of vandalism include articles on hot and controversial topics, celebrities, and current events.[5][6] In some cases, people have been falsely reported as having died. This has notably happened to United States Senators Ted Kennedy and Robert Byrd, and American rapper Kanye West.[7]

The challenge from vandalism on Wikipedia was once characterized by the former Encyclopædia Britannica editor-in-chief Robert McHenry:[8][9] "The user who visits Wikipedia [...] is rather in the position of a visitor to a public restroom. It may be obviously dirty so that he knows to exercise great care, or it may seem fairly clean, so that he may be lulled into a false sense of security. What he certainly does not know is who has used the facilities before him".

There are various measures taken by Wikipedia to prevent or reduce the amount of vandalism. These include:

Editors are generally warned prior to being blocked. Wikipedia employs a 5-stage warning process leading up to a block. This includes:[13]

In 2005, the English Wikipedia started to require those who create new articles to have a registered account in an effort to fight vandalism. This occurred after inaccurate information was added to Wikipedia in which a journalist was accused of taking part in Kennedy's assassination.[2]

Wikipedia has experimented with systems in which edits to some articles, especially those of living people, are delayed until it can be reviewed and determined that they are not vandalism, and in some cases, that a source to verify accuracy is provided. This is in an effort to prevent inaccurate and potentially damaging information about living people from appearing on the site.[14][15] 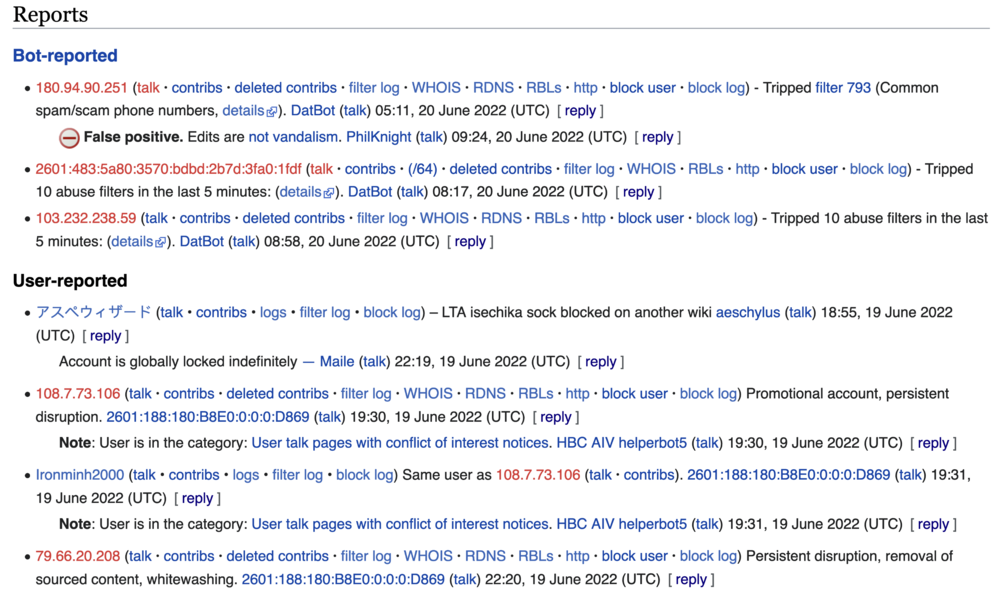 The most well-known "bot" that fights vandalism is ClueBot NG. The bot was created by Wikipedia users Christopher Breneman and Cobi Carter in 2010 (succeeding the original ClueBot created in 2007; NG stands for Next Generation)[16] and uses machine learning and Bayesian statistics to determine if an edit is vandalism.[17][18]

While the bot has been effective in helping keep Wikipedia clean, some claim the bot is hostile to new users by not being able to apply a human brain's knowledge to the edit, and leaving impersonal templates.[19]

The MediaWiki title blacklist extension prevents page move vandalism and creation vandalism by using regular expressions to identify bad titles. Titles on the blacklist can only be created by or moved to by administrators. Pages that are also created repeatedly can be protected to prevent vandals from recreating bad pages.

In addition to the title blacklist, the spam blacklist prevents external link spamming, a form of vandalism. New/unregistered users who want to add external links are required to answer a CAPTCHA.

The "bad image list" prevents images that could be used to vandalize pages from being inserted, such as images with sexual content. Images on the list can be added only to pages where the use of the image is explicitly allowed.

The entirety of the MediaWiki namespace, the main page, and high risk templates are protected to prevent high server load and sudden interface changes.

The edit filter can also prevent vandalism by disallowing the bad edit altogether, or by allowing only autoconfirmed users or administrators to perform the edit. 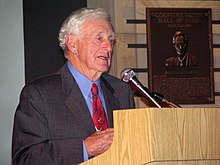 John Seigenthaler, who in 2005, criticized Wikipedia

In May 2005, a user edited the biographical article about John Seigenthaler, Sr. so that it contained several false and defamatory statements.[20] The inaccurate claims went unnoticed between May and September 2005, when they were discovered by Victor S. Johnson, Jr., a friend of Seigenthaler. Wikipedia content is often mirrored at sites such as Answers.com, which means that incorrect information can be replicated alongside correct information through a number of websites. Such information can develop a misleading air of authority because of its presence at such sites:[21]

Then [Seigenthaler's] son discovered that his father's hoax biography also appeared on two other sites, Reference.com and Answers.com, which took direct feeds from Wikipedia. It was out there for four months before Seigenthaler realized and got the Wikipedia entry replaced with a more reliable account. The lies remained for another three weeks on the mirror sites downstream.

Comedian Stephen Colbert made repeated references to Wikipedia on his TV show The Colbert Report, frequently suggesting on air that his viewers vandalize selected pages. These instances include the following:

In April 2014, the Liverpool Echo reported that computers on an intranet used by the British government had been used to post offensive remarks about the Hillsborough disaster on Wikipedia pages relating to the subject. The government announced that it would launch an inquiry into the reports.[24] Following the allegations, The Daily Telegraph reported that government computers appeared to have been used to vandalize a number of other articles, often adding insulting remarks to biographical articles, and in one case falsely reporting a death.[25]

The article for Donald Trump was blanked twice on 22 July 2015.

Politicians are a common target of vandalism on Wikipedia. The article on Donald Trump was replaced with a single sentence critical of him in July 2015,[26][27][28] and in November 2018, the lead picture on the page was replaced with an image of a penis, causing Apple's virtual assistant Siri to briefly include this image in answers to queries about the subject.[29] Both Hillary and Bill Clinton's Wikipedia pages were vandalized in October 2016 by a member of the Internet trolling group Gay Nigger Association of America adding pornographic images to their articles.[30] That same month, New York Assembly candidate Jim Tedisco's Wikipedia page was modified to say that he had "never been part of the majority", and "is considered by many to be a total failure". Tedisco expressed dismay at the changes to his page.[31] On 24 July 2018, Utah senator Orrin Hatch posted humorous tweets after Google claimed that he had died on 11 September 2017,[32] with the error being traced back to an edit to his Wikipedia article.[33][34][35] Similarly Google's information bar listed Nazism as one of the California Republican Party's primary ideologies after vandalism to its page.[36]

The week of 29 January 2017 saw various acts of Wikipedia vandalism that attracted media attention. White House Press Secretary Sean Spicer's Wikipedia page was vandalized and his picture replaced with that of Baghdad Bob, Dana J. Boente's page description was edited to read that he was "the newest sock puppet for the Trump Administration", and Paul Ryan's picture was added to a list of invertebrates, with the edit summary stating that he was added due to his lack of a spine.[37][38][39]

On 27 September 2018, the personal information of United States senators Lindsey Graham, Mike Lee, and Orrin Hatch were added to their respective Wikipedia articles during the hearing of Supreme Court Nominee Judge Brett Kavanaugh. The information included their home addresses and phone numbers, and originated from the network located from within the United States House of Representatives. The edits were removed from Wikipedia and hidden from public view shortly afterwards.[40][41] These edits were captured and automatically posted publicly to Twitter by an automated account. Twitter shortly removed the posts and suspended the account in response to the incident.[42] An internal police investigation located the person who made the edits, and 27-year-old Jackson A. Cosko (a staffer for Congress paid by an outside institution) was arrested and charged with multiple felony crimes relating to the incident. Cosko was sentenced in 2019 to four years in prison after pleading guilty to five felonies.[43][44][45]