He lives in Halle an der Saale.

He was born to Polish parents who had moved to Germany in 1945, in Neugattersleben, in Saxony-Anhalt, then East Germany. Waldemar Cierpinski was originally a successful steeplechase runner but decided to switch to the marathon in 1974.

He was virtually unknown when he entered the 1976 Olympic marathon. He ran with the lead pack until American Frank Shorter broke free after the 25 km mark. Cierpinski chased Shorter down then took the lead, winning the race by 51 seconds. His victory was so unexpected that in the Olympic football final that evening, goalkeeper Jürgen Croy, invoked Cierpinski, a "living example of mediocrity", to inspire East Germany to a 3–1 victory over fancied Poland.[1] 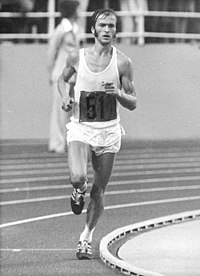 Cierpinski at the 1976 Olympic Games

Cierpinski finished in fourth place at the 1978 European Championships. In the 1980 Summer Olympics, Cierpinski ran wisely and didn't match the suicidal pace the leaders had set. He caught up to the leaders at the 36 km mark and soon led by a healthy margin. Although Gerard Nijboer from the Netherlands narrowed the gap in the last kilometre, Cierpinski sprinted the last 200 m to win his second consecutive Olympic gold medal and duplicate the feat of legendary Ethiopian Abebe Bikila of winning two straight Olympic marathons.

Cierpinski finished third in the marathon in the 1983 World Championships in Athletics. He was denied a chance of an unprecedented third Olympic marathon win by the Eastern Bloc boycott of the 1984 Summer Olympics in Los Angeles, which was Tit for tat for the United States-led boycott of the 1980 Summer Olympics in Moscow. He left competition the same year and started a coaching career.

It is now well known that East Germany operated a state-sponsored system of providing performance-enhancing drugs to as many as 10,000 athletes from about 1968 to 1988. Cierpinski was implicated by East German track and field research files uncovered by Werner Franke at the Stasi headquarters in Leipzig in the late 1990s.[3]

As a result, 1976 silver medallist Frank Shorter has advocated the belief that Cierpinski cheated and has supported official review of past performances, i.e. considering stripping medals from athletes who are found later on to have cheated, as a deterrent to drug-cheats.[4] Fourth-place finisher Don Kardong has also written that he believed Cierpinski was involved in the East German doping program.[5] Shorter's allegations are very similar to those of Shirley Babashoff, who accused the East German women of drug cheating during the swimming events in the same Olympic Games, which was later substantiated by investigators in the PBS documentary, "Secrets of the Dead: Doping for Gold."