From Wikipedia, the free encyclopedia
Jump to navigation Jump to search
Wikipedia conference in India

Wiki Conference India is a national Wikipedia conference organised in India. The first Wiki Conference India conference was held in November 2011, in Mumbai, the capital of the Indian state of Maharashtra. It was organised by the Mumbai Wikipedia community in partnership with Wikimedia India Chapter [1][2] with the support of the Wikimedia Foundation.[3] The conference is positioned as the annual national flagship event for Wikimedia in India and is open to participation from citizens of all nations. The focus is on matters concerning India on Wikipedia projects and other sister projects in English and other Indian folk languages.[2][4][5]

The first WikiIndia Conference was held in Mumbai between 18 and 20 November 2011.[6]

WikiConference India aims to provide a common platform for all Indian Wikimedians to interact, share ideas and collaborate. The conference ran from the 18 to 20 November 2011 and was held in Mumbai University in South Mumbai with the largest talks being held in the University's historic convocation hall.[1][7][8] 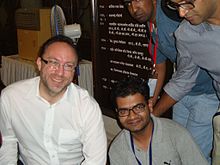 The conference was inaugurated by a keynote addresses by Jimmy Wales.[1][6] Arnab Goswami spoke on "Neutrality", he was an invited guest speaker.[9] Barry Newstead spoke on the last day.

A Hackathon (attendees pictured) was held in concurrently with the conference

Various sessions on topics such as:[2]

Concurrent with the conference was a Hackathon, hosted by the Maharashtra Chamber of Commerce, Industry and Agriculture (MACCIA) Kala Ghoda, South Mumbai.[2] Other activities included a City Tour and a Heritage Walk.

Wikimedians and non Wikimedians from all over India and from other countries, Wikimedia Foundation staff and co-founder[12] A hundred applicants got scholarships based on their experience and contribution to Wikipedia and other projects.[13] More than 700 people attended the conference.[7]

There was a demonstration outside the conference by protesters against the map used by Wikipedia to show the borders of India.[7]

The second Wiki Conference India has been held in Mohali city of Punjab State near Chandigarh. The venue of the Conference was CGC Landhran . Katherine Maher, Executive Director of WMF and Nataliia Tymkiv, Board Member of WMF attended this conference.[15]