This is the Version 1.0 Editorial Team page.

In late 2003, Jimmy Wales had proposed making an offline release version of Wikipedia. This group was formed in late 2004 to meet this challenge. Our work involves identifying and organizing articles, and improving and maintaining a core set. Our work does not hinder the existing wiki process for creating and editing articles, but rather it supports that work by providing additional organization. We aim to produce collections that can be used in places where the internet coverage is expensive or non-existent. Our early collections were distributed via DVD; now these are shared via download, then distributed on hardware such as a Raspberry Pi. Originally, only a fixed selection was available, but there is now much flexibility in how selections can be made. This project is now mainly one point in a network of groups who collect and distribute open educational resources from the Internet in an offline form.

How you can help

You are encouraged to join us and help out with one of the projects, or to discuss Wikipedia 1.0 on the talk page. A significant part of our work centers around maintaining the assessment scheme, which is now used on more than six million articles by over 2000 WikiProjects[dead link] on the English Wikipedia. It is also being used on other language projects. Generally work on this team is sporadic – periods of hectic activity followed by long periods of waiting! Often work is long and tedious – checking through a list of 22,000 instances of profanities one by one, organizing 10,000 keywords taken from category names, or dealing with technical bugs when the assessment bot fails for no apparent reason. However, it is all worth it in the end.

Our strategy has been intensely debated, but the group has reached a consensus. We elected not to follow the German model. Instead we chose to start with a core of quality articles on key subjects and expand from there. We have produced three test versions: Version 0.5, Version 0.7, and Version 0.8 with the goal of releasing better collections of articles in due course. The next general release is generically referred to as "Release Version" while our first "official" comprehensive release will be called Version 1.0. These collections are then made available for offline use using a reader such as Kiwix, which was chosen as Sourceforge project of the month. The project was on hiatus for several years because of the loss of our main developer. However, as of February 2016, a new group of developers has begun work on upgrading the code and the process, in order to start producing new collections again, especially collections for schools.

Although we have much of the requisite system automated, there are still some outstanding tasks:

Please let us know on the Talk page if you can help with any of these. 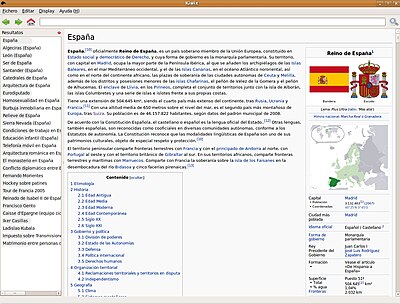 A page read offline in Kiwix

At present, the main activities are:

To select articles, we are mainly using a bot-assisted selection process based on assessment by individual WikiProjects, where articles are selected automatically based on quality and importance project rankings.

Based on discussions (at the 2017 Potsdam hackathon and since), we plan to reactivate RevID selection. Previously code based on WikiTrust was used in Version 0.8, and this appeared to produce a largely vandalism-free collection of articles. This worked by scoring each RevID based on the edits remaining in it, and choosing the most "trustworthy" recent RevID based on the WikiTrust algorithm.

If you would like to start a new project, please discuss it on the talk page first before adding it here.

The process of generating an offline version of a sub-selection of Wikipedia article is multistage. It needs many dedicated and singled-purposed operations. The following chart show how the WP1 project envisioned things in 2010.

The general process for producing an offline release

Even if this chart is still, to a large extend, valid; we practice and envision things slightly differently nowadays. One of the most important paradigm change we had to make is to remove as much as possible human based manual activity because the amount of work is simply too high to be achieved in a reasonable amount of time. We tend now to automatize as much as possible the whole process. As a consequence the project is now predominantly focused on technology.

The first software created to support the WP1 project has been the User:WP_1.0_bot. First written in Perl by User:CBM and then slighly modified and maintained by a few other volunteers. In 2020 the bot has been totally rewritten in Python following modern development standards (API, automated tests, etc.) by User:Audiodude. The code base is available en developed on Github.

The WP1bot had and still have three traditional purposes:

The WP 1.0 bot tracks assessment data (article quality and importance data for individual WikiProjects) assigned via Talk page banners. If you would like to add a new WikiProject to the bot's list, please read the instructions at Wikipedia:Version 1.0 Editorial Team/Using the bot.

The global summary table below is computed by taking the highest quality and importance rating for each assessed article in the main namespace.