From Wikipedia, the free encyclopedia
Jump to navigation Jump to search
For predecessors and prototypes of Wikipedia, see History of Wikipedia.
Project by the Wikimedia Foundation

Wikipedia Zero was a project by the Wikimedia Foundation to provide Wikipedia free of charge on mobile phones via zero-rating, particularly in developing markets.[1][2] The objective of the program was to increase access to free knowledge, in particular without data-usage cost. With 97 operators in over 72 countries, it is estimated that access to Wikipedia was provided to more than 800 million people through this program.[3] The Wikipedia Zero program ended in 2018.

The program was launched in 2012,[4] and won a 2013 South by Southwest Interactive Award for activism.[5] After having received criticism over the years for violating the principle of net neutrality,[6][7] in February 2018 the Wikimedia Foundation announced the end of the initiative, stating that it would take a new approach on partnerships.[8] Despite providing service to 900 million persons, the project was seen as jeopardized by a lack of growth, and by the declining price of cell phone data.[9]

Facebook Zero has been cited as an inspiration for Wikipedia Zero.[10] 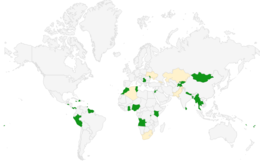 Wikipedia Zero countries as of September 6, 2016

Below is a selective history of launches. For a complete list of participating mobile networks and launch dates, see Wikimedia Foundation: mobile network partners.

In February 2018, the Wikimedia Foundation announced that the Wikipedia Zero program would be completely phased out by the end of 2018.[8][26]

Play media
Promotional video, produced by the Wikimedia Foundation and narrated by their founder Jimmy Wales

Play media
Promotional video about free access to Wikipedia, featuring a school-class from South Africa and their open letter to telecommunication companies

The Subsecretaria de Telecomunicaciones of Chile ruled that zero-rating services like Wikipedia Zero, Facebook Zero, and Google Free Zone, that subsidize mobile data usage, violate net neutrality laws and had to end the practice by June 1, 2014.[27][28] The Electronic Frontier Foundation has said, "Whilst we appreciate the intent behind efforts such as Wikipedia Zero, ultimately zero rated services are a dangerous compromise."[6] Accessnow.org has been more critical, saying, "Wikimedia has always been a champion for open access to information, but it's crucial to call out zero-rating programs for what they are: Myopic deals that do great damage to the future of the open internet".[7] The Wikimedia Foundation's Gayle Karen Young defended the program to The Washington Post, saying, "We have a complicated relationship to net neutrality. We believe in net neutrality in America", while adding that Wikipedia Zero required a different perspective in other countries: "Partnering with telecom companies in the near term, it blurs the net neutrality line in those areas. It fulfills our overall mission, though, which is providing free knowledge".[29]

Hilary Heuler argues that "for many, zero-rated programs would limit online access to the 'walled gardens' offered by the web heavyweights. For millions of users, Facebook and Wikipedia would be synonymous with 'internet'."[30] In 2015, researchers evaluating how the similar program Facebook Zero shapes information and communications technology use in the developing world found that 11% of Indonesians who said they used Facebook also said they did not use the Internet. 65% of Nigerians, and 61% of Indonesians agree with the statement that "Facebook is the Internet" compared with only 5% in the United States.[31]

An article in Vice magazine notes that the free access via Wikipedia Zero made Wikimedia Commons a preferred way for its users in Bangladesh and elsewhere to share copyrighted material illicitly. This caused problems at Wikimedia Commons (where uploading media that is not free-licensed is forbidden). The Vice article is critical of the situation created by Wikipedia Zero and of the backlash among Wikimedia Commons editors, arguing: "Because they can't afford access to YouTube and the rest of the internet, Wikipedia has become the internet for lots of Bangladeshis. What's crazy, then, is that a bunch of more-or-less random editors who happen to want to be the piracy police are dictating the means of access for an entire population of people."[32]