From Wikipedia, the free encyclopedia
Jump to navigation Jump to search
Community of contributors to Wikipedia
"Wikipedians" redirects here. You may be looking for Wikipedia:Wikipedians.

The Wikipedia community is the community that creates and maintains the online encyclopedia Wikipedia. Editors may be known as Wikipedians. Oxford Dictionary added the word "Wikipedian" in August 2012.[1]

In April 2008, writer and lecturer Clay Shirky and computer scientist Martin Wattenberg estimated the total time spent creating Wikipedia at roughly 100 million hours.[2] In November 2011, there were approximately 31.7 million registered user accounts across all language editions of which around 270,000 were "active" (made at least one edit every month).[3] 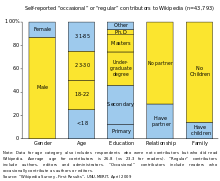 A study published in 2010 found that the contributor base to Wikipedia "was barely 13% women; the average age of a contributor was in the mid-20s".[4] A 2011 study by researchers from the University of Minnesota found that females comprised 16.1% of the 38,497 editors who started editing Wikipedia during 2009.[5] In a January 2011 New York Times article, Noam Cohen observed that 13% of Wikipedia's contributors are female according to a 2008 Wikimedia Foundation survey.[6] Sue Gardner, a former executive director of the Wikimedia Foundation, hoped to see female contributions increase to 25% by 2015.[7] Linda Basch, president of the National Council for Research on Women, noted the contrast in these Wikipedia editor statistics with the percentage of women currently completing bachelor's degrees, master's degrees and PhD programs in the United States (all at rates of 50% or greater).[8]

In response, various universities have hosted edit-a-thons to encourage more women to participate in the Wikipedia community. In fall 2013, 15 colleges and universities—including Yale, Brown, and Penn State—offered college credit for students to "write feminist thinking" about technology into Wikipedia.[9] A 2008 self-selected survey of the diversity of contributors by highest educational degree indicated that 62% of responding Wikipedia editors had attained either a high school or undergraduate college education.[10]

In August 2014, Wikipedia co-founder Jimmy Wales said in a BBC interview that the Wikimedia Foundation was "... really doubling down our efforts ..." to reach 25% of female editors (originally targeted by 2015), since the Foundation had "totally failed" so far. Wales said "a lot of things need to happen ... a lot of outreach, a lot of software changes".[11] Andrew Lih, writing in The New York Times, was quoted by Bloomberg News in December 2016 as supporting Wales's comments concerning shortfalls in Wikipedia's outreach to female editors. Lih states his concern with the question indicating that: "How can you get people to participate in an [editing] environment that feels unsafe, where identifying yourself as a woman, as a feminist, could open you up to ugly, intimidating behavior".[12]

Play media
Video which articulates the enthusiasm of the Wikipedia community

In a 2003 study of Wikipedia as a community, economics Ph.D. student Andrea Ciffolilli argued that the low transaction costs of participating in wiki software create a catalyst for collaborative development, and that a "creative construction" approach encourages participation.[13] A paper written by Andrea Forte and Amy Bruckman in 2005, called "Why Do People Write for Wikipedia? Incentives to Contribute to Open-Content Publishing", discussed the possible motivations of Wikipedia contributors. It applied Latour and Woolgar's concept of the cycle of credit to Wikipedia contributors, suggesting that the reason that people write for Wikipedia is to gain recognition within the community.[14]

To these six motivations he also added:

"Motivations of Wikipedia Content Contributors", a paper by Heng-Li Yang and Cheng-Yu Lai, hypothesised that, because contributing to Wikipedia is voluntary, an individual's enjoyment of participating would be the highest motivator.[21] However, their study showed that although people might initially start editing Wikipedia out of enjoyment, the most likely motivation for continuing to participate is self-concept based motivations such as "I like to share knowledge which gives me a sense of personal achievement."[21]

A further study in 2014 by Cheng-Yu Lai and Heng-Li Yang explored the reasons why people continue editing Wikipedia content. The study used authors of the English-language version of the site and received 288 valid online survey responses. Their results indicated and confirmed that subjective task value, commitment, and procedural justice affected satisfaction of Wikipedians; and satisfaction influenced an author's continued intention to edit Wikipedia content.[22]

Editors of Wikipedia have given personal testimonials of why they contribute to Wikipedia. A theme of these testimonials is the enjoyment that editors may get from contributing to Wikipedia and being part of the Wikipedia community. Also mentioned is the potential addictive quality of editing Wikipedia. Gina Trapani of Lifehacker said "it turns out editing an article isn't scary at all. It's easy, surprisingly satisfying and can become obsessively addictive."[23] Jimmy Wales has also commented on the addictive quality of Wikipedia, saying "The main thing about Wikipedia ... is that it’s fun and addictive".[24] Wikipedians sometimes award one another "barnstars" for good work. These personalized tokens of appreciation reveal a range of valued work extending beyond "simple editing" to include social support, administrative actions, and types of articulation work. The barnstar phenomenon has been analyzed by researchers seeking to determine what implications it might have for other communities engaged in some collaborations.[25]

Wikipedia has spawned a number of community news publications. An online newsletter, The Signpost, has been published since 10 January 2005.[26] Professional cartoonist Greg Williams created a webcomic called WikiWorld which ran in The Signpost from 2006 to 2008.[27] A podcast called Wikipedia Weekly was active from 2006 to 2009 and more sporadically thereafter,[28][29] while a series of conference calls titled "Not the Wikipedia Weekly" ran from 2008 to 2009.[29]

Offline activities are organized by the Wikimedia Foundation or the community of Wikipedia.

Wikimania, an annual conference for users of Wikipedia and other projects operated by the Wikimedia Foundation

Wikimania is an annual international conference for users of the wiki projects operated by the Wikimedia Foundation (such as Wikipedia and other sister projects). Topics of presentations and discussions include Wikimedia Foundation projects, other wikis, open-source software, free knowledge and free content, and the different social and technical aspects which relate to these topics.

The annual Great American Wiknic is a social gathering that takes place in some cities of the United States each year during the summer, may be prior to the 4th of July. The Wiknic concept allows Wikipedians to bring together picnic food and to interact in a personal way.[30]

There is also a yearly WikiConference North America.

Wikipedia has been subject to some kinds of criticism.[31][32] For example, the Seigenthaler and Essjay incidents caused criticism of Wikipedia's reliability and usefulness as a reference.[33][34][35] The complaints related to the community include the effects of users' anonymity, the attitudes towards newcomers, the abuse of privileges by administrators, biases in the social structure of the community, in particular, gender bias and lack of female contributors,[36] and the role of the project's co-founder Jimmy Wales, in the community.[37] A controversy was stirred with paid contributors to Wikipedia, which prompted the Wikimedia Foundation to send a cease and desist letter to the Wiki-PR agency.[38]

Wikipedia's co-founder Larry Sanger who later founded rival project Citizendium characterized the Wikipedia community in 2007 as ineffective and abusive, stating that "The community does not enforce its own rules effectively or consistently. Consequently, administrators and ordinary participants alike are able essentially to act abusively with impunity, which begets a never-ending cycle of abuse."[39] Oliver Kamm of The Times expressed skepticism toward Wikipedia's reliance on consensus in forming its content: "Wikipedia seeks not truth but consensus, and like an interminable political meeting the end result will be dominated by the loudest and most persistent voices."[40] 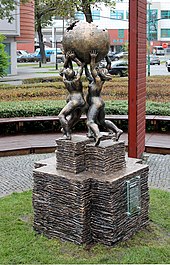 The Wikipedia Monument, by Mihran Hakobyan (2014), in Słubice, Poland

A Wikipedia Monument was erected in Słubice, Poland in 2014 to honor the Wikipedia community.[41]

The 2015 Erasmus Prize was awarded to the Wikipedia community for "[promoting] the dissemination of knowledge through a comprehensive and universally accessible encyclopedia. To achieve that, the initiators of Wikipedia have designed a new and effective democratic platform. The prize specifically recognizes Wikipedia as a community — a shared project that involves tens of thousands of volunteers around the world."[42]