From Wikipedia, the free encyclopedia
Jump to navigation Jump to search
American businessman and philanthropist
This article is about the railroad magnate. For his great-grandson, the governor of Rhode Island, see William Henry Vanderbilt III.

William Henry "Billy" Vanderbilt (May 8, 1821 – December 8, 1885) was an American businessman and philanthropist.[1] He was the eldest son of Commodore Cornelius Vanderbilt, an heir to his fortune and a prominent member of the Vanderbilt family. Vanderbilt became the richest American after he took over his father's fortune in 1877 until his own death in 1885, passing on a substantial part of the fortune to his wife and children, particularly to his sons Cornelius II and William. He inherited nearly $100 million from his father. The fortune had doubled when he died less than nine years later.

Billy was born in New Brunswick, New Jersey, on May 8, 1821, to Commodore Cornelius Vanderbilt and Sophia Johnson.[1]

His father Cornelius frequently berated and criticized him, calling his eldest son a "blockhead" and a "blatherskite". Billy longed to show his father that he was not, in fact, a blatherskite, but never dared stand up to the Commodore. A major turning point in their relationship occurred on the family trip to Europe on the steamship Vanderbilt in 1860, after which, the two became very close and Billy was given a greater role in business matters.[2]

He was matriculated at Columbia College with the class of 1841 but did not graduate, according to official records.[3]

1879 cartoon depicting Vanderbilt as "The Modern Colossus of (Rail) Roads"

His father carefully oversaw his business training, starting him out at age 19 as a clerk in a New York banking house. After joining as an executive of the Staten Island Railway, he was made its president in 1862 and three years later was appointed vice-president of the Hudson River railway.[citation needed]

In 1883, reporter John Dickinson Sherman questioned him about why he ran the limited express train: "Do your limited express trains pay or do you run them for the accommodation of the public?" Vanderbilt responded with: "Accommodation of the public? The public be damned! We run them because we have to. They do not pay. We have tried again and again to get the different roads to give them up; but they will run them and, of course, as long as they run them we must do the same." The interview was then published in the Chicago Daily News, but Vanderbilt's words were modified. Several accounts of the incident were then disseminated; the accounts vary in terms of who conducted the interview, under what circumstance and what was actually said. William received bad publicity and clarified his response with a subsequent interview by the Chicago Times. In that interview he was quoted saying: "Railroads are not run for the public benefit, but to pay. Incidentally, we may benefit humanity, but the aim is to earn a dividend."[4]

In 1884 the firm Grant & Ward went bankrupt and ruined the investments of both Ulysses S. Grant and Vanderbilt, whom Grant had convinced to invest $150,000. Ferdinand Ward, known as the Napoleon of Wall Street, had, unknowingly to both Grant and Vanderbilt, operated the company as a Ponzi scheme that resulted in financial ruin for many. The other associate, Buck Grant, apparently was unaware of Ward's Ponzi scheme swindle. Ward was later prosecuted. To pay Vanderbilt back, Grant mortgaged his Civil War memorabilia, including his sword. Although this did not fully cover the $150,000 debt, Vanderbilt accepted the memorabilia as payment and wiped out the $150,000 debt owed by Grant. Vanderbilt later recouped Grant's other mortgaged war memorabilia, including the memorabilia given by Grant, and returned them to Ulysses S. Grant's wife, Julia Grant, after Grant's death in 1885.[citation needed] 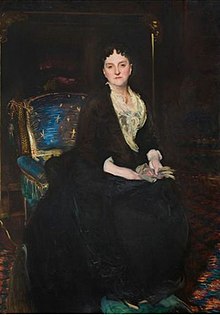 In 1841, Billy married Maria Louisa Kissam (1821–1896), daughter of the Reverend Samuel Kissam and Margaret Hamilton Adams. Together, they had nine children: 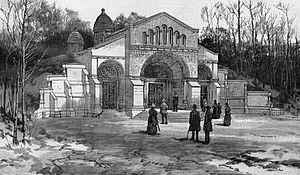 Vanderbilt family mausoleum at the Moravian Cemetery on Staten Island, where William Henry is buried.

In 1883, he resigned all his company presidencies and had his sons appointed as important chairmen but left the day-to-day running of the businesses to experienced men appointed president.[citation needed]

He died on December 8, 1885, in Manhattan, New York City.[1] He was interred in the Vanderbilt family mausoleum at the Moravian Cemetery in New Dorp on Staten Island, New York. His estate was divided among his eight children and his wife, the bulk of the estate going to his eldest two sons, Cornelius and William.[citation needed] 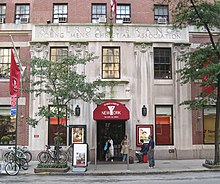 Vanderbilt was an active philanthropist who gave extensively to a number of philanthropic causes including the YMCA; funding to help establish the Metropolitan Opera (which was not an entirely selfless act; his and other New York "new money" families had been socially excluded from the New York Academy of Music and set up the Metropolitan as competition); and an endowment for the Columbia University College of Physicians and Surgeons. In 1880, he provided the money for Vanderbilt University in Nashville, Tennessee, to construct the Wesley Hall building for use as the Biblical Department and library and included 160 dormitory rooms for students and professors, lecture halls, as well as a cafeteria. The building was destroyed by fire in 1932 and his son Frederick made another donation to help cover the insurance shortfall and allow a new building to be constructed.[citation needed]

Vanderbilt was an avid art enthusiast; his collection included some of the most valuable works of the Old Masters, and over his lifetime Vanderbilt acquired more than 200 paintings, which he housed in his lavish and palatial Fifth Avenue mansion.[citation needed]