From Wikipedia, the free encyclopedia
Jump to navigation Jump to search
Software that manages separately different parts of display screens 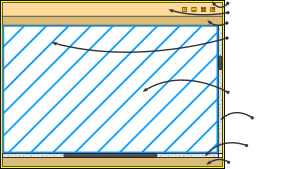 Typical elements of a window. The window decoration is either drawn by the window manager or by the client. The drawing of the content is the task of the client.

In computing, a windowing system (or window system) is software that manages separately different parts of display screens.[1] It is a type of graphical user interface (GUI) which implements the WIMP (windows, icons, menus, pointer) paradigm for a user interface.

Each currently running application is assigned a usually resizable and usually rectangular surface of the display to present its GUI to the user; these windows may overlap each other, as opposed to a tiling interface where they are not allowed to overlap. Usually a window decoration is drawn around each window. The programming of both the window decoration and of available widgets inside of the window, which are graphical elements for direct user interaction, such as sliders, buttons, etc., is eased and simplified through the use of widget toolkits.

From a programmer's point of view, a windowing system implements graphical primitives. For example: rendering fonts or drawing a line on the screen. It provides an abstraction of the graphics hardware for use by higher-level elements of the graphical interface such as a window manager.[citation needed]

A display server protocol can be network capable or even network transparent, facilitating the implementation of thin clients.[citation needed] 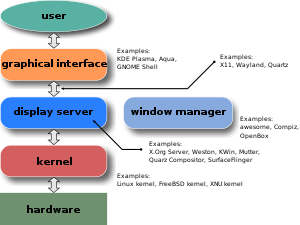 The display server is a key component in any graphical user interface, specifically the windowing system. 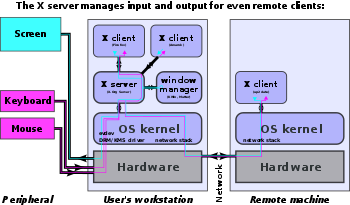 The X.Org Server communicates with its clients, e.g. Amarok, over the X11 protocol

One example of a display server is the X.Org Server, which runs on top of the kernel (usually a Unix-like kernel, such as Linux or BSD). It receives user input data (e.g. from evdev on Linux) and passes it to one of its clients. The display server also receives data from its clients; it processes the data, it does the compositing and on Linux it passes the data to one of three kernel components – DRM, gem or KMS driver. The component writes the data into the framebuffer and content of the framebuffer is transmitted to the connected screen and displayed. X relies on GLX.

One of the implementations of display server concept is X Window System, in particular its actually used version – X.Org Server and Xlib and XCB client libraries. The X.Org Server is a display server, but in its current implementation it relies on a second program, the compositing window manager, to do the compositing. Examples are Mutter or KWin. 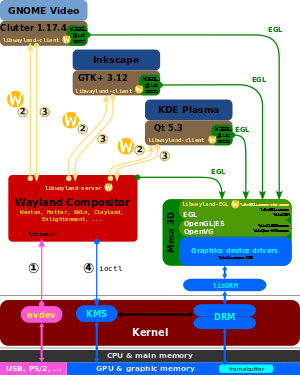 Wayland compositors communicate with Wayland clients over the Wayland display server protocol. This protocol defines that clients can directly write data into the framebuffer using the EGL rendering API. The display server still gets to decide which window is on top and thus visible to the user and also still is responsible for passing data regarding to input devices from evdev to its clients.

Wayland is used to a certain degree in some Linux desktop distributions, such as Fedora. It is also well suited for mobile computing and has been adopted, for example, by the smartphone- and tablet-focused projects Tizen, Sailfish OS and AsteroidOS.

An implementation of Wayland is available under the MIT License, the libwayland-client and libwayland-server libraries.

There is an ongoing effort to add Wayland support to Chrome OS.[2]

There are implementations of the Mir display server, the libmir-server and the libmir-client libraries available under the GPLv3.

Everything in Android is rendered to a "surface"; "surfaces" are produced by applications and placed into a queue that is managed by SurfaceFlinger.[4][5]

Yet another Android-specific solution is "Gralloc". Gralloc handles device memory i.e. it does allocation, arbitration, it handles synchronization via Android/Linux fence file descriptors. Gralloc competes with other solutions like e.g. Mesa's Generic Buffer Management (GBM) or Nvidia's EGLStreams. The Gralloc hardware abstraction layer (HAL) is used to allocate the buffers that underlie "surfaces".

For compositing in Android, Surfaces are sent to SurfaceFlinger, which uses OpenGL ES to do the compositing.

Hardware Composer HAL (HWC) was introduced in Android 3.0 and has evolved steadily over the years. Its primary purpose is to determine the most efficient way to composite buffers with the available hardware. As a HAL, its implementation is device-specific and usually done by the display hardware OEM.

For Apple's macOS family of operating systems, Quartz Compositor fulfils the tasks of a display server and of a window manager in the windowing system.

For Microsoft Windows, from Windows Vista onward, Desktop Window Manager enables the use of hardware acceleration to render the graphical user interface. It was originally created to enable portions of the new "Windows Aero" user experience, which allowed for effects such as transparency, 3D window switching and more. It is also included with Windows Server 2008, but requires the "Desktop Experience" feature and compatible graphics drivers to be installed. From Windows 8 onwards DWM can't be disabled and is software rendered if no suitable graphics card is installed.

Some systems such as Microsoft Windows (XP, 9x and earlier), the classic Mac OS (version 9 and earlier), and Palm OS, contain a windowing system which is integrated with the OS.[citation needed]